Workday Testing In Action: The Foundation for a Successful Deployment | Webinar | WATCH NOW

In our new series Inside Stories, hear about Magellan Health’s incredible shrinking test team, including why they moved to automated testing and how a combination of Kainos Smart, a new staffing strategy, and a flexible approach to manual testing allowed them to slash testing time and resources.

My name is Lawrence Berra. I’m Manager of HR Systems here at Magellan, a team which supports an organisation of nearly 9,000 employees throughout the United States.

When we went live with Workday, we were probably in the same boat as a lot of you. Testing was taking more time than we’d planned, and productivity for several members of our HR Systems team dropped during each Workday release due to testing, updating job aids and attending meetings. We also realised that we didn’t have a good way to document our testing and provide test results to auditors.

In our HR team, we try to automate any manual processes that we can so that team members can focus on strategic work that supports growth of the business instead of manual processes. When we saw what Smart had to offer, it seemed like a perfect solution for our automation, productivity and auditing needs, and there’s no doubt that Smart has lived up to our expectations. To explain why, let me tell you a little bit about our transition from Workday 25 to 26 without Smart compared to our experience of Workday 26 to 27 using Smart.

When we started testing for Workday 26, we had a lot of employees involved in testing: the HR Systems team, team leaders from various areas within the organisation, and HR technologists from within HR. We held one or two meetings a week to collaborate, review statuses, answer questions and update each other on the status of our testing. These were at least 30 minutes to one hour long. Our manual testing process relied on groups to communicate with each other, which didn’t always happen. For example, in meetings we might ask recruiters if they’d put those people that we requested in the system (because the benefits team was waiting on them do start their portion of the testing) and discover that recruitment had done it on Monday, yet it was Thursday and nobody had informed benefits.

At that point too, each tester was expected to complete 50+ lines of their testing grid and follow specific process flows that we had built out as a kind of a ‘best flow’ through the system. What we discovered later, though, was that wasn’t always the case—our testing scripts weren’t always set up for the best case.

During the update from Workday 25 to 26, we had two full weeks where everyone involved was testing, and the majority of their day was spent testing. Then we had four weeks that took up the resources of our HR Systems team, followed by two weeks of testing and retesting any fixes and any tickets that needed to be entered with Workday. We also took the production tenant offline from the time Workday took it down on Friday until Monday morning because we weren’t confident that our testing was as thorough as it needed to be, and we wanted to ensure that things were working the way we expected before we put the upgrade live.

“The amount of critical but mundane and repetitive testing that we offloaded to Smart allowed us to halve the number of employees in the testing group…[but] we didn’t eliminate any staff from the organisation.”

We also have over 70 software integrations with Workday. I would run all 70 of those integrations two times and then try to manually spot check as many of the records as I could. (It was horrible. I hope that nobody has to go through that—ever.) Once we showed how long the manual process of running each those in two tenants took—plus our manual business process and security testing—it became very clear to management that we needed something quicker and more automated to do this testing.

In between Workday 26 and 27, we fully implemented Kainos Smart and were able to reduce our testing costs by 70%. We also reduced the number of employees involved in hands-on testing by 80%, freeing up staff to concentrate on their other HR responsibilities. This was due to two factors: the automation itself, and the improvements to our overall testing process that the automation facilitated.

The amount of critical but mundane and repetitive testing that we offloaded to Smart allowed us to halve the number of employees in the testing group. Of those remaining members, only a few were fully involved in hands-on testing. The others were just there to provide information that the testers might need from their area of HR. We didn’t eliminate any staff from the organisation. We just whittled down the group by asking each area within HR ‘Who is ultimately responsible for your configuration and your set up?’ Each representative became part of the team we call HR technologists, and we made them responsible for the testing that needed to be done in their area.

“…generating that much savings right after the implementation of a new product delighted upper management.”

Our average manual testing grid dropped from more than 50 lines to 20. We also changed it from a formal, structured testing grid to more of a tester-driven one. Because Smart was handling the higher risk tests that needed to be carried out using a consistent methodology, it permitted us to loosen the reins a little. Instead of telling the benefits team: ‘Do this, this and this’ for every step, screen and field, I told them ‘Tell me how you use Workday on a daily basis. What would you need to test if we were doing an update? Put that in a grid for me. If you open a life event regularly, I want you to test that.’ It meant we weren’t dictating what to do even though it might not be right, or right any more. And they came back to us with new, shorter grids saying ‘Here are the things that are important to us, and here is how we tested them.’ Then we’d review them to decide if we wanted to build a script for them moving forward. The automation and these shorter manual grids helped us to reduce our total update timeline from eight to four weeks of testing.

The changeover to Smart made us stop and look at our whole process, not just the testing component. As a result, we moved to online collaboration, which further streamlined our efforts. We set up a project management group in Workplace by Facebook and eliminated our weekly meetings in lieu of online collaboration. We did have one kickoff meeting to ensure that everybody was onboard with how the process would work, but any other meetings were either hosted via chat in Workplace or were just posted as comments in Workplace.

“Kainos Smart is one of the best vendors that we work with right now and delivered one of our best implementations.”

Finally, when we went to production, instead of taking our tenant offline for the entire weekend like we had for Workday 26, we allowed the tenant to come back up right after Workday had processed the update. Thanks to Kainos and our new testing process, we were that confident in our results. That was a big win for the organisation, and generating that much savings right after the implementation of a new product delighted upper management.

As we’ve gotten more used to Smart, we’ve been able to further reduce the number of HR Systems staff it takes to run it. There’s no doubt in my mind that Smart has lived up to our expectations. The cost and resource savings alone more than satisfied upper management, but the implementations and continued support from the Smart team are also worth mentioning. Any problems, questions or any support we’ve needed has been there. Their turnaround time is quick and everyone we have talked to has been knowledgeable and helpful. Overall, Kainos Smart is one of the best vendors that we work with right now and delivered one of our best implementations.

Be Like Magellan. Test Your Next Workday Update Better, Faster, and With Less Effort. 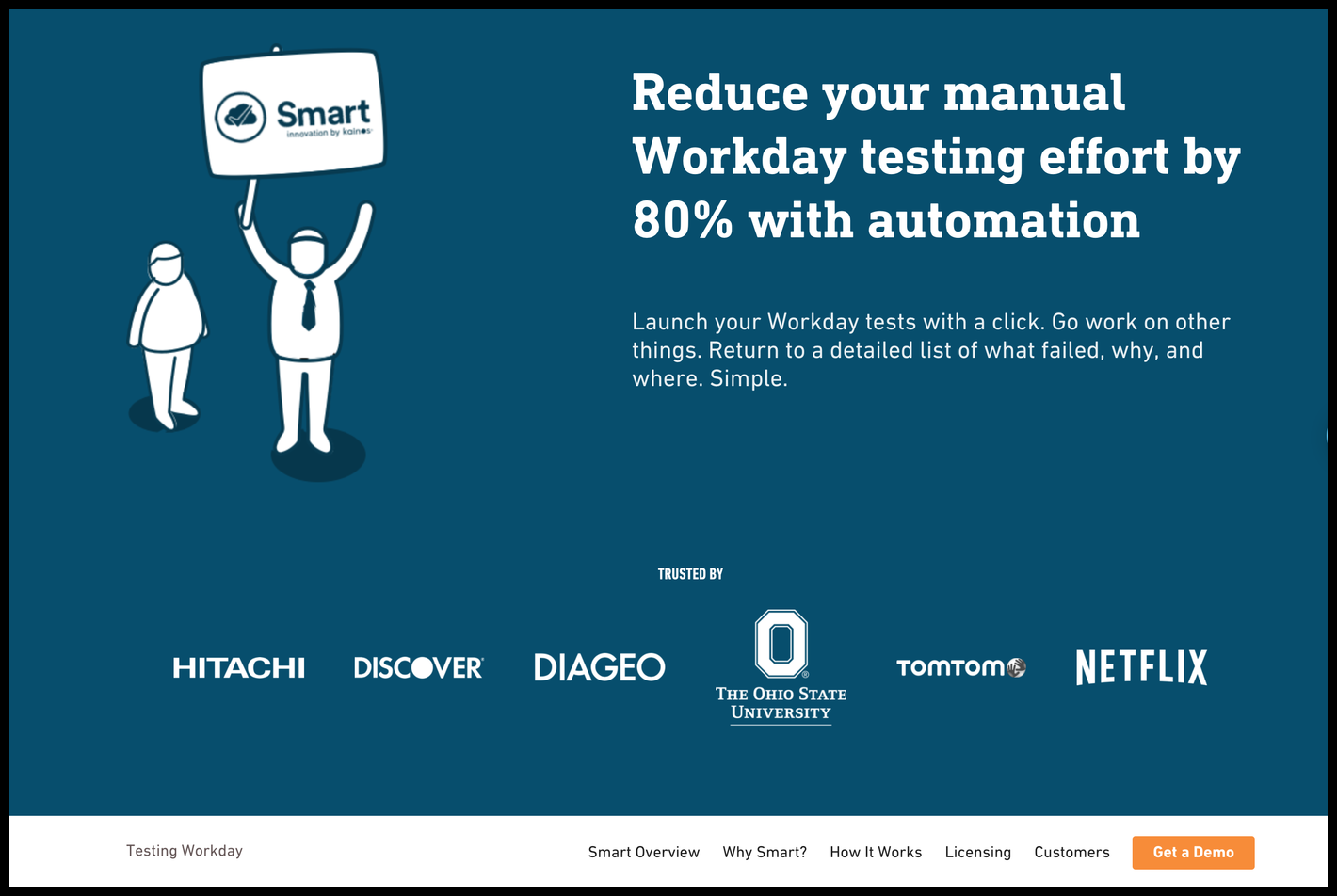 If you didn’t get a chance to catch our webinar “Get Ready for Workday 2020R1—The Financials Preview”, our Workday Financials experts have put together some answers to the key questions asked.

Join us as we explore some of the standout HCM features of Workday 2020R1 in this post-webinar Q&A from our Workday architects Veronica and Mari.

Leave us your details and we'll send you useful Workday-related content like this straight to your inbox.